Can the gig economy help to create jobs in Africa?

When it comes to careers, a full-time job has been considered the norm in most countries. However, platform and tech companies such as Uber, Alibaba, and Google have started to undermine this long-established concept and have built their success on new business models that change the way many view work.

The industry these firms have built is often called the ‘gig economy’. Strictly speaking this is a catch-all term describing people that are not salaried employees, but work independently and get paid for each transaction or “gig” that they complete.

The gig economy is mostly seen as a disruptor in a well-established system. However, the stable ‘9 to 5’ way of living is actually far from reality for the vast majority of people around the world – especially in low-income countries, where formal jobs are still only available to the few. In Zimbabwe, for example, it is estimated that 90 per cent of people work in the informal sector as subsistence farmers, vendors and small-scale traders. Meanwhile, 71 per cent of registered businesses consist of individual entrepreneurs, many with multiple ‘hustles’ – some entrepreneurial, some not. Overall, McKinsey estimates that 63 per cent of the total labour force in Africa engages in some form of self-employment.

Despite significant efforts from governments and investors around the world, traditional jobs will not be created quickly enough to absorb the 122 million new entrants to the African labour market over the next two years. There is also some evidence that a formal job may not always be the best option for all. Blattman & Dercon’s study on textile workers in Ethiopia tested the assumption of a full-time job as an ‘escalator out of poverty’. They followed almost 1,000 applicants who were and were not offered jobs to five businesses — a beverage bottler, a garment factory, a shoemaker and two industrial greenhouse operations —for over a year, surveying them multiple times. The findings were surprising: most people who got an industrial job soon changed their minds. A majority quit within the first few months. They ended up doing what those who had not gotten the job offers did — going back to the family farm, taking a construction job or selling goods at the market.

Contrary to the expert predictions, most of those earned about as much money as they could have at the factory, often with fewer hours. By the end of a year only a third of the people were still employed in the industrial sector and those who expanded their agricultural or market selling, raised their earnings by a third and did not feel the need to resort to factory jobs.

This is clearly an isolated study and more research is required that takes into account the overall positive impact that job security has on individual wellbeing, the ability to plan and to withstand economic shocks.  What it does do though is illustrate that there is mounting (academic and anecdotal) evidence that instead of being merely disruptive, the gig economy has the potential to complement efforts to increase formal employment and provide another avenue to meaningful engagement with the formal economy.

Flexible work, offered for low-skilled workers, can unlock significant economic benefits such as raising labour-force participation, providing opportunities for the unemployed, or even boosting productivity for millions around the world. Yet, companies at the frontline of the gig economy receive criticism for their inability to provide stable incomes, social security and benefits to their workers. As usual, there is no clear answer and benefits and drawbacks are probably in the eye of the beholder. If you are already working small task-based insecure gigs, then getting access to them safely and efficiently increases productivity and your ability to get paid and your safety.

One thing is clear, gig-based companies must embrace their responsibilities and treat their external workforce, which often sits at the heart of their business models, with dignity and respect. Whilst not always offering the full-suite of benefits usually associated with permanent quality jobs, there are a range of tools that companies have at hand. Perks such as training, a more predictable income and an affiliation with a multinational company can be game changers that traditionally have not been available to workers in Africa’s informal sector. New models, such as a pension for informal workers in Ghana, are also gaining traction. Providing education and skills training, such as soft skills and communication training, can be win-win. Transferable skills can be leveraged by contractors to increase their income or secure a formal job down the line and it benefits the company through increased performance per worker.

Jumia and Mr.Green (which we cover in the next section) are two examples of how companies in Africa approach their responsibility towards their external workforces that benefits both sides.

Jumia, Africa’s largest e-commerce platform, has taken the continent by storm and is now present in 16 countries, delivering over 8 million packages a year. The company has, on average, 500 million clicks per day on its websites.

44 per cent of Africa’s population has a mobile phone – a number that is rising quickly. However, less than one per cent of all retail in Africa is conducted online, compared with 18 per cent in the UK and 20 per cent in China. Jumia has found an ingenious solution to make e-commerce work even for customers who are not online.

The business works with about 10,000 commission-based sales agents across Nigeria (powerfully named J-Force). A J-Force member is usually a tech-savvy young person, such as a recent graduate or a young mother, eager to make some part-time income. After receiving training from Jumia on customer service and the intricacies of how to shop, order and pay on the site, J-Forcers then engage with their neighbours and larger community to help those without internet access or unfamiliar with e-commerce to shop online and deliver the goods. J-Forcers provide last-mile logistics – another challenging aspect of e-commerce in markets with limited postal networks. Contractors can make between $100-300 per month. In comparison, a Nigerian teacher takes home around US$140 per month for a full-time job.

Being part of J-Force also opens up opportunities to be promoted and join the company full-time. Jumia Food, Jumia’s on-demand food delivery service currently offers opportunity to increase income to about sixty motorcycle drivers in Kenya.  Mitchelle Khaemba, Jumia’s first female driver mentioned that her continuous training and support with the venture has gone a long way in preparing her for the task, “apart from the hard skills, Jumia Food has equipped me with the basics of professional customer care and client service, some of which I wouldn’t have acquired on the regular track.”

Mr. Green Africa is a Kenyan-based company that collects and processes household waste and recyclables in greater Nairobi. Out of the 500MT tons of plastic waste Nairobi produces, less than 10 per cent is recycled. Most of the waste is thrown away and picked up by roaming unemployed men and women – often perceived as dirty and poor, with no access to education and health care. Yet, they are performing an important function for society.

Mr. Green Africa has made these collectors the cornerstone of their business model and has set out to change the perception of the collectors and of waste in general by demonstrating the economic and environmental value recycling brings. Currently, Mr. Green Africa works with over 1,500 registered suppliers, mostly men around twenty years old. Every day, the company’s suppliers bring up to 180kg of plastics to each of the companies 30 collection points dotted around Greater Nairobi. At the site, the plastics are weighted on an electronic scale, recorded in centralized system and the waste picker receives a predetermined price for each kg of plastics. This is often 30 per cent higher than what they would get with other traders.

In addition to a stable and predictable source of income, all suppliers get life and entrepreneurship training and are enrolled in a loyalty program. The team at Mr. Green Africa is still honing the particulars but Keiran Smith, co-founder and CEO believes that the benefits will include access to loans, health care, tools and protective gear such as gloves, boots and mobile phones. For many, this is the first secure income they have received Keiran hopes this will be a route out of poverty for many.

Jumia and Mr. Green Africa are two examples of future-focused, tech-enabled companies that provide opportunities for people to engage with the formal economy and increase their incomes, especially for young people. 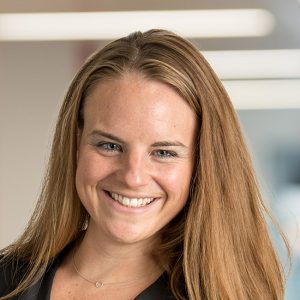 Katharina joined CDC in July 2017 to help define, measure and maximise the impact of investments within the Consumer Businesses investment team.

Her primary focus is to understand and drive development impact across our health, education, telecoms, media, tech and retail portfolio. Katharina has a special interest in education, tech and venture capital investments. She is preparing an education impact framework, as well as supporting our impact thesis around venture investments. Katharina has introduced our healthcare framework to health providers. She has done this through an impact assessment of India’s largest maternity hospital, impact workshops, case studies and the development of a global ‘Investors in Health’ community. She also supports MedAccess, CDC’s access to medicine facility.
View all posts