Climate-smart farm investments will pay dividends for Kenya and planet

For COP26, CDC's Seema Dhanani writes about the need for more climate-smart investment in Kenya.

This article was originally published by Business Daily – you can find it on their website here.

The drought in Kenya continues to wreak havoc. Those in the country’s north, northeast and coastal regions are victim to the drought’s immediate impact, unable to provide food for their families or the market.

Meanwhile, the rest of the country suffers from inflated prices due to dwindling supply. Food security in Kenya is under extreme threat.

Agriculture is hugely vulnerable to climate change, particularly in our country, where crops rely on regular, predictable rainfall.

But changes in temperature and precipitation patterns have created extreme weather conditions such as flash flooding, drought and locust invasions that have not only slashed crop yields but fuelled regional conflict over diminishing access to essential resources.

As negotiations to tackle some of these issues get underway at COP26 this month, Kenyans are already reeling from the consequences of climate change. But we are also formulating our own solutions.

In Kenya, agriculture is extraordinarily valuable. Agriculture represents over 50percent of the country’s GDP, 60 percent of employment and 65 percent of exports. But extreme flooding and droughts create an economic liability at the cost of 2-2.8 percent of GDP a year. As such, we should seek out agricultural practices that support the economy and our environment, leveraging our natural resources in the process.

We have already made some real progress to this end. Kenyan logging company, Komaza, is investing in micro-forestry to build a ‘virtual’ plantation that brings together tens of thousands of smallholder farmers using their previously unproductive land to grow trees to sell as timber in commercial markets.

In Kenya, inadequate rains and degraded soil mean that less than 20 percent of the area is suitable for crops. In August this year, 35,000 farmers joined the Drylands Development Programme, which works with farmers to encourage the production of annual crops between or under trees, in a technique called agroforestry, and has supported them by introducing new technologies and farming practices to maintain the soil.

Komaza, is investing in micro-forestry to build a 'virtual' plantation that brings together tens of thousands of smallholder farmers.

It is encouraging to see Kenya move towards adopting climate-smart practices in the fight against climate change. But climate-smart technology requires significant financing.

Sharing financial resources, human capital, and expertise will also accelerate the adoption of climate-smart agriculture. Both investment and collaboration are required when time is a factor.

In May this year, we committed $100 million to agricultural conglomerate ETG to support over 550,000 farmers in Africa to improve crop yields and livelihoods. As one of our largest corporate debt investments, the deal strengthens food value chains by expanding logistics networks, boosting agriculture yields, and producing staple foods such as grains, rice, and cocoa.

ETG also has plans to launch a data-driven agricultural intensification project in Kenya to improve farmer productivity by enhancing environmental risk management and climate resilience of its maize, coffee and tea supply chains through improved soil and crop nutrition management.

Last year, in collaboration with DEG and EIB, we set up the 2X Climate Finance Taskforce, an initiative that convenes DFIs and multilateral development banks (MDBs) to build expertise on strengthening gender-smart investments for climate adaptation, resilience and mitigation.

Climate-smart agriculture must support women’s livelihoods —given their prominence in the sector. In Kenya, 80 percent of farmers are women.

While we have already started to develop new practices that support the development of a climate-smart agricultural sector, we must do more. In 2018, Sh243.3 billion ($2.4 billion) of public and private capital was invested in climate-related activities in Kenya — approximately one-third of the financing that the country needs annually to meet the targets set out in its nationally determined contribution set out in the Paris Agreement.

We need a fundamental recalibration of how local and international communities engage with our economy and our environment, one where climate-smart solutions are the norm, not the exception. 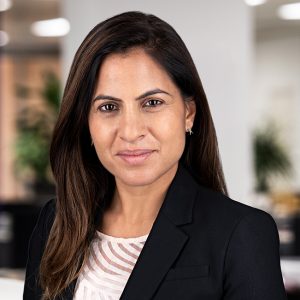 Seema Dhanani joined CDC as Head of Office and Coverage Director for Kenya in November 2019. Previously, Seema worked for Mauritius Commercial Bank in Nairobi where she was the Chief Representative Officer for East & West Africa. She has previously worked for Standard Chartered Bank as head of Private Clients and Executive Director for Strategy for East Africa. Prior to moving to Kenya, she worked for Standard Chartered Bank in the UK as portfolio manager for structured credit. She will be based in Nairobi. At CDC, Seema is responsible for originating investment opportunities and supporting deal execution and portfolio management activities in Kenya. She also leads our in-country stakeholder engagement (including with HMG) and CDC office administration in Kenya.