Markets in Africa during the second half of 2018

Here we call out the biggest macroeconomic themes in the second half of 2018. Drawing on our own data and analysis, information from third parties, as well as the views of our experienced teams, we provide a unique view on our core markets in the region.

Economic growth in Sub-Saharan Africa continued and is estimated to have reached 2.7% in 2018 (Table 1). This upward trajectory was in the face of significant oil price fluctuations due to Saudi Arabia’s oversupply. Consequently, oil exporting countries such as Nigeria and Angola suffered economically.

The Continent’s economic outlook is mixed. However, we are especially encouraged by:

There are 18 national or presidential elections taking place in Africa throughout 2019 (Table 2), including those in the continent’s largest economies, Nigeria and South Africa. Undoubtedly, political tensions will rise and may negatively impact investors’ sentiment towards Africa. We highlight the following political changes as key to the continent’s stability:

Countries such as Botswana and Ghana maintain a relatively healthy political environment. As such, their economies are comparatively stable.

Table 2 : List of national/ presidential elections in Africa in 2019

Africa’s fundraising climate continued to be challenging throughout 2018, directly related to the slowdown of growth in emerging markets generally. EMPEA reported an increase in funds raised in Africa, rising from $2.3bn in 2017 to $2.8bn in 2018.  However, this remains well below 2015’s high of $4.5bn and the overall investment landscape is not encouraging.  In the first three quarters of 2018, $1bn was raised in Africa – which represents a 42% year-on-year decline, highlighting the fundraising challenges.

Political uncertainty will continue to have a negative impact on fundraising in 2019. However, venture capital looks set to be comparatively attractive to investors, spurred by growth in the technology sector in Sub-Saharan Africa. 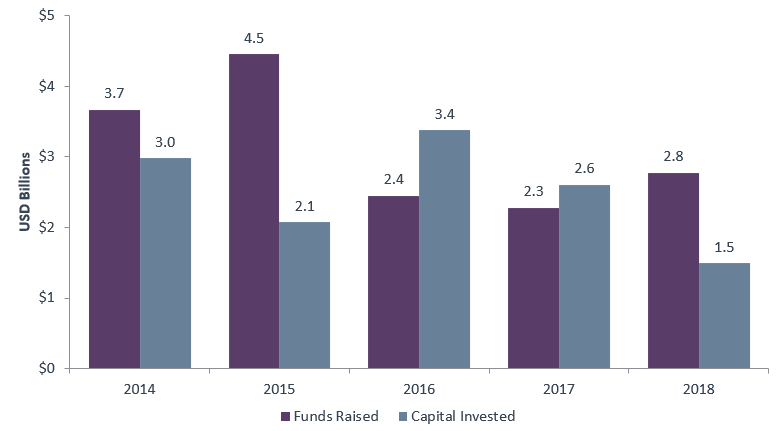 Despite this, we have continued the deployment of our funds through flexible and bespoke investment solutions.  CDC contributed more than 5% of all capital raised by funds targeting the African region with vintages between 1991 and 2018 and have invested in approximately 22% of all funds that have reached financial close during the same period.

The MSCI indices show that the African equity market declined significantly in 2018. This reflected investors’ concerns over domestic political uncertainty as well as the continuous slowdown in emerging markets. The strong US dollar and the US-China trade dispute continue to weigh on investors’ risk appetite.  We have observed a minor recovery in African markets in early 2019 and anticipate mid-term volatility.

Currencies in major African currencies are estimated to further depreciate in the mid-term, except for the CFA Franc and Egyptian Pound, according to EIU (Figure 2).

CDC, as a long-term investor, will continue supporting businesses in the continent despite market volatility. 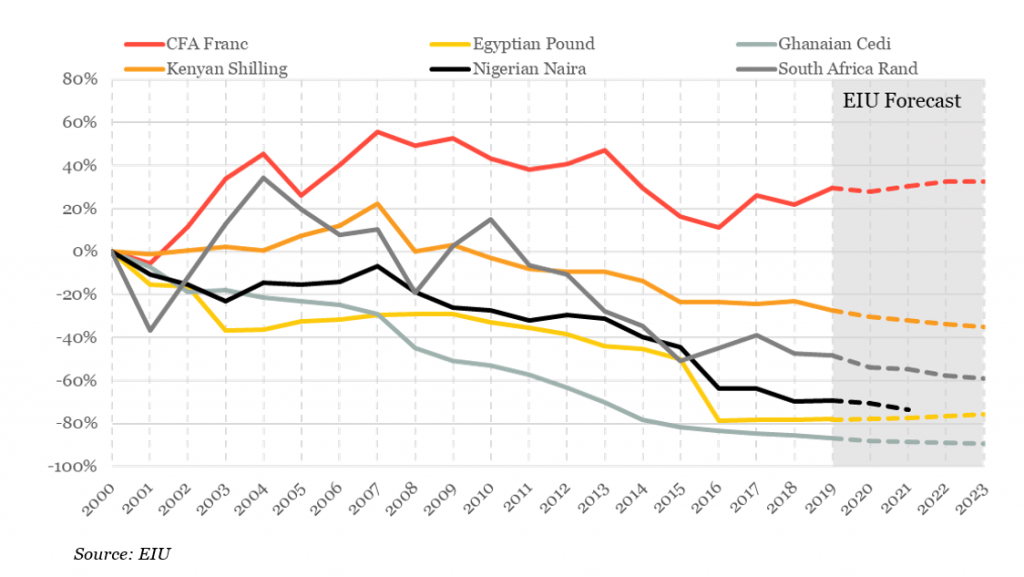